A sporting spectacle is not the same as a wedding ceremony or a TV channel 'parivaar' award show, writes Kalyan Kar, Editor-in-Chief, Best Media Info 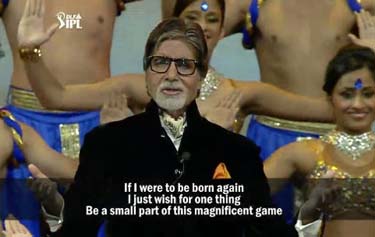 This is not to hold a brief for the much discredited Lalit Modi. But the truth is that the Gala Opening of IPL 5 was a big letdown. A sporting spectacle is not the same as a wedding ceremony or a TV channel 'parivaar' award show

Amitabh Bachchan reciting a poem on cricket written by Prasoon Joshi during the opening ceremony.

Can't believe Rajeev Shukla said "If the beginning is like this you can understand how the tournament will go". God, I hope he's wrong – Omar Abdullah, CM, Jammu & Kashmir

Must say, I am enjoying the tweets on the IPL 5 opening ceremony more than the event. - Dhunji Wadia, CEO, Everest Brand Solutions

The gentleman's game of cricket just got murdered tonight. I sleep with teary eyes and a heavy heart as I look at my old college flannels – Pratap Bose, COO, DDB Mudra

Watching the IPL opening ceremony, I know what my old man would have said. Can we please start the cricket now?! – Rajdeep Sardesai, Editor-in-Chief, CNN-IBN

If the quality of cricket on #IPL5 is anything like the opening ceremony, then god save the sponsors – Naresh Gupta, Chief Strategy Officer, iYogi

After weeks of sustained marketing build-up for the tournament of tournaments, it was all over in two hours on a balmy evening in Chennai, with egg on everybody’s face – everybody as in those involved in conceptualising and executing the Gala Opening for IPL Season 5. The storm on Twitter – by fans and, more importantly, those who matter in the communication space in forming opinions – says it all. It was a lame duck affair, crassly put up, lacking in finesse. Above all, unlike in previous seasons, it was held on the YMCA College of Physical Education Ground, in Nandanam, Chennai. It seems the idea of using a stadium eluded the otherwise fertile minds of the power-packed BCCI management. Somebody missed the point that this is the opening ceremony of a global level cricket competition, not a Bollywood event per se. Imagine holding an Olympic opening ceremony or an ICC Cricket World Cup or FIFA World Cup open ceremony on a college ground!

Not that I am holding a candle for the discredited former Czar of IPL Lalit Modi (I have a pathological dislike for those given to dishonesty, impropriety and self-aggrandisement, such as Suresh Kalmadi and Lalit Modi), but the choice of venue was rightly criticised by Modi on Twitter.

Coming to the show itself, viewers have witnessed much better gala events done by the likes of Star Plus and Colors with their endless list of “parivar” awards. Filmfare has invariably and successfully mounted awards nights with much greater finesse and style, with vastly more sophisticated stages and laser and psychedelic lighting. Or did BCCI plan this as a shaadi ka baraat in the first place? May be that was keeping in style with the new IPL Commissioner! And oh, he did admit that he is a politician! Was that to ensure failures and criticisms don’t matter?

The show kicked off with the best-known Indian walking. Amitabh Bachchan recited a poem written by Prasoon Joshi in very shudh Hindi. The baritone voice was very much audible, but often one struggled to figure out the last part of a sentence in a long poem. Wonder how Prasoon felt! Again, the BCCI brass missed the point: Big B is any day the best choice for a Gujarat Tourism TVC or a grand-uncle advising youngsters on the benefits of Chyavanprash. T20 is wham-bam stuff, it is all about a new genre of cricket which is raging like a storm. Let’s look at it like this: Cliff Richards is still alive, spending his late years somewhere in England. Would he be the right choice to sing at the opening of the London Olympics later this year? It is like asking Elton John, who sang the beautiful ‘Candle in the Wind’ on BBC after Princess Di met a horrific end in a Paris tunnel, to sing the opening notes at the next FIFA World Cup!

Prabhdeva. I am given to understand that he enjoys the reputation of being able to dance as though he has no bones in his plastic/elastic body, and more smoothly than the late Michael Jackson! Wow. But then, after a Google search, I discovered that he is almost 40. Little wonder then that viewers were treated to a lame, stiff, meaningless dance number. So, was he brought in to please the few thousand Chennai fans sitting at the YMCA ground and not for the millions of foolish TV viewers across this geographically huge, cricket-crazy country? Somebody got it wrong again. May be Chris Gayle would have been a better choice with a Calypso number!

Then there was the parade of the nine brilliant Captains of the IPL teams. Why were they looking so uncomfortable? Did somebody tell them to show their mettle in ramp walking? Were the two girls accompanying each of them meant to add glamour? If so, didn’t viewers deserve a better deal to indulge is some voyeurism, say, with the sexy cheerleaders that IPL is synonymous with, accompanying the Captains?

Coming to Bollywood’s stud, Salman Khan, where was the much expected ‘dabaangg’? His pink-orange trouser reminded one of a bygone era when Rajesh Khanna and, somewhat later on, Rishi Kapoor, who strutted around in colourful trousers, something that most fans would dread to wear out on the street! As for his dance gig, give us a break, haven’t we seen Salman perform much, much better at other events?

At the end, it was left to Priyanka Chopra and Katy Perry to lift the evening. Priyanka tried hard, and successfully. But then, she had a fixed time on the stage. So did singer Katy, who was brought all the way from California. She sang reasonably well, but it is her outfit that caught more eyeballs. But then, she was nowhere near the flame-haired Shakira, whose dance number ‘Waka waka’ had the world dancing after her FIFA World Cup performance.

I agree with Pratap Bose. The gentleman's game of cricket just got murdered last night.