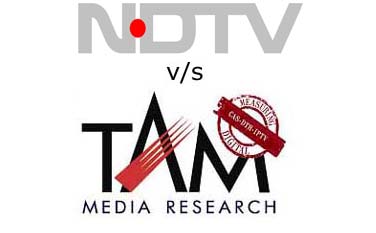 The war of words between NDTV and WPP do not seem to end soon as NDTV has come up with fresh statement asking six basic questions from WPP.

The statement said, “The past few days have been a master class in how to obfuscate the real issues behind the TAM ratings row. Sir Martin's large team has avoided answering the key questions we had asked. We'd like to ask again if Sir Martin is aware of some of these facts. Here are just 6 of the real key questions:

1. Is it true that on the 11th of April 2012, the head of security for Nielsen, Robert Messemer admitted to severe corruption in the TAM system? And that the head of research, Paul Donato admitted to other severe errors in TAM data and systems?

2. Is it true that Nielsen and Kantar launched their own investigation in January this year, following which they witnessed and verified details about corruption in the system, including audio and video recordings, and statements from a whistleblower?

3. Is it true that the CEO of Kantar, Eric Salama apologized to NDTV at the meeting on April 11, after hearing Mr. Messemer, and promised immediate action?

4. Is it true that Sir Martin Sorrell was personally informed about the problems in August 2011, in the presence of several witnesses? What were the specific steps that were taken after this?

5. Is it true that the flawed TAM data continues to be published, despite an assurance that it would be stopped on the July 1?

6. Is it true that other broadcasters and NDTV have been pointing to flaws in the TAM system for years? And that the News Broadcasters Association of India has now asked for TAM ratings to be suspended till issues are resolved?

While it is true that NDTV has suffered extensive damages, we have consistently been focused on helping Nielsen, Kantar and TAM to fix their own systems.”

Going back in history, the statement further says, “The issues with TAM ratings were first raised by NDTV 8 years ago, when it was a clear undisputed number one even according to TAM.”

According to the statement, “For several months this year, NDTV worked closely with the highest levels of Nielsen and Kantar, as they investigated their own TAM ratings system in India. We didn't breathe a word about it to the press. There was no talk of "financial settlement".  What we asked was that the TAM system be cleaned up.”

About the legal battle, NDTV said, “We first made the threat of legal action on June 4, after it became clear that no meaningful action was being taken. Finally, we had no choice but to file the lawsuit because it was felt there was no other way to secure real change in the TAM system.”

On the settlement issue, NDTV said, “In our statement two days back we said NDTV's lawyers have made no approach for settlement after the lawsuit was filed and communicated. This is perfectly true. The email from NDTV CEO Vikram Chandra, which WPP has selectively quoted from, was in fact the communication of the lawsuit to Nielsen and Kantar. It was a lengthy mail containing details of the suit, the cause for damages and the reason why it was filed in the USA. As is routine in such communications, it also contained an invitation to talk, together with the attached lawsuit. Just as we have been working for a long period together with Nielsen, Kantar and TAM to repair their system in India.”

“NDTV has no desire to get into a prolonged trial by media with WPP. Our key intent in all these years has been to secure the cleaning up of the TAM ratings system. That desire is clearly shared by just about every stakeholder in the Indian broadcasting sector, and we are deeply grateful for the extensive support that this demand has received,” said the statement.

NDTV also urged WPP to avoid a further obfuscation of the real issues and to turn its attention to the basic facts that are contained in their lawsuit.