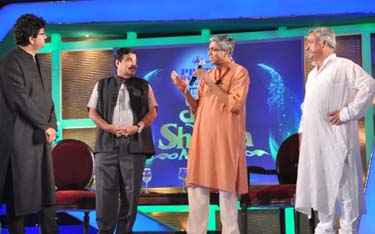 They are India’s celebrated ad gurus, Piyush Pandey, Executive Chairman & Creative Director, Ogilvy South Asia, and Prasoon Joshi, President, McCann Worldgroup South Asia. Not many may have known that one of them had learnt from the other. On Thursday, July 5, at a glittering ceremony in the capital, they were felicitated with the IBN7 Guru Shishya Award. Pandey is credited for ‘Indianising’ Indian advertising and this tradition has been carried on by Joshi who started his career under Pandey at Ogilvy & Mather Delhi about 20 years ago.

Paying compliments to his guru Pandey, Joshi said, “We are in the communication business and to ensure that the message is properly conveyed to the consumer, we speak their language. With the evolution of television, we have been able to communicate to the people in remote areas in their respective languages. I learned the art of being local and its importance in the communication business from Piyush. He is a guru who trains and then sets his students free.”

When asked if Indian advertising will ever touch international standards, Pandey said, “We need not try to reach their standard. Rather we should aim to reach to the remote areas of India because the main purpose of advertising is to reach the villages. And if you get an international award on this journey, then nothing like that. We are better off than many other countries. The quality of our advertising is many times better.”

IBN7, in partnership with Pratap University, felicitated eight other Guru-Shishya duos from different walks of life. The Lifetime Achievement Award was presented to guru Ebrahim Alkazi and his Shishya Om Puri. Ebrahim Alkazi is the flag-bearer of the theatrical tradition that brought new realism and purpose to Indian drama. He nurtured some of the greatest acting talents of the era including Om Puri.

The nine guru-shishya duos that were honoured at the awards ceremony are:

Guru Anjolie Ela Menon and Shishyaa Vimmi Indra - Emerging contemporary artist Vimmi Indra owes it all to her mentor, renowned muralist Padma Shri Anjolie Ela Menon. Since childhood, Vimmi was always inspired by her mentor’s work and her dream came true in 2004 when she got the opportunity to become Anjolie’s shishyaa.

Guru Mahabir Singh and Shishyaas Geeta & Babita Phogat – Wrestler Mahabir Singh trained his daughters, including Geeta and Babita Phogat, in an akhara built at his home. The hard work and dedication by father-cum-coach Mahabir inspired the daughters to bring accolades to the nation in 2010 Commonwealth Championship. Now, Geeta has become the first Indian woman wrestler to qualify for Olympics.

Guru Raghu Rai and Shishya Nitin Rai – Starting at an early age of 13 as an apprentice to his father and legendary lensman Raghu Rai, Nitin Rai carried the legacy of photography forward and is now an established photographer in his own right. Like his father, Nitin’s work too has been featured & appreciated nationally and internationally.

Guru Rana Kapoor and Shishyaa Raakhe Kapoor - Like any daughter, Raakhe Kapoor also looked up to her father Rana Kapoor, the CEO and MD of YES Bank. Rana Kapoor influenced her life in many ways, and today, Raakhe has gained enough knowledge and exposure to plan her own financial services venture.

Guru Popatrao Pawar & Shishya Rajendra Thange - Sarpanch Popatrao Pawar, changed the face of his drought-prone village to one that got Maharashtra its first National Productivity Award for the best watershed work. Inspired by Popatrao’s vision and his tireless efforts, Rajendra Thange took up the responsibility to work for the prosperity of Hivre Bazaar and has improved the state of nearby villages too.

Speaking on the initiative, Ashutosh, Managing Editor, IBN7, said, “The guru-shishya relationship has been the sacred cornerstone of our religious and educational traditions and it gives us immense pleasure to acknowledge and honour this unconditional and selfless bond.”

The IBN7 Guru-Shishya Awards adhered to a selection process of selection which had the IBN Editorial Board at its core. This board nominated, deliberated, and after many levels of scrutiny, finalised the winners, keeping in mind their sterling contribution and achievements.

In a glittering awards ceremony held in the capital, chief guest, BJP President Nitin Gadkari felicitated the winners. The grand finale of the awards ceremony will be telecast on IBN7 on Saturday, 14 July 2012 at 8:00 PM.