Discovery Science investigates the dark side of science in 'Dark Matters'

The show premieres every Thursday at 9.30 pm starting May 24 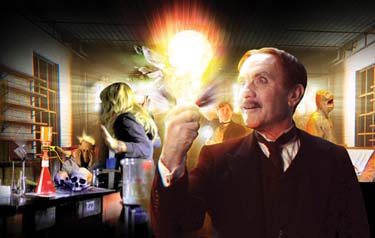 Discovery Science investigates the dark side of science in ‘Dark Matters’

The show premieres every Thursday at 9.30 pm starting May 24

Discovery Science is all set to examine what happens when scientific research goes too far, with its new series – Dark Matters. Hosted by John Noble, renowned Hollywood actor, the series takes viewers into the world of strange science to expose some of history’s most bizarre experiments. The six-part series delves into the most unusual research ever conducted, including attempts to crossbreed humans and apes, actual zombie investigations and head transplantation studies.

Dark Matters premieres every Thursday at 9.30 pm starting May 24.

Dark Matters offers a fascinating insight into the moments of scientific history where the individuals went to extreme measures to achieve a breakthrough. The series narrates dramatized stories of science on the dark and ragged edge of human understanding, where experiments can be ethically controversial and the results can be mind-blowing. Cutting-edge CGI recreations and incredible virtual sets enable viewers to witness the pivotal moments when brilliant minds face controversy or ethical crossroads on the fringes of science.

The first episode features the shocking story of Soviet scientist Dr. Ilya Ivanov, who in the 1920s attempted to start his own “planet of the apes.”  In an attempt to build an invincible army, Ivanov tried to crossbreed humans with apes to create a race of super soldiers.  It also introduces Morris Jessup, a self-identified UFO expert who attempted to expose what he believed to be a military cover-up involving experiments with invisibility. Finally, unorthodox studies by America’s greatest inventor, Thomas Edison, result in a dark and unintended invention which remains infamous today.

Other bizarre experiments featured in the series are:

UFO expert Morris Jessup tested invisibility and teleportation after receiving an extraordinary letter stating that the U.S. Navy had experimented with this very concept before.  Would his investigation be the end of his career?

In the 1920s, Soviet scientist Dr. Ilya Ivanov began performing disturbing experiments to crossbreed humans with apes. Could he create intelligent apes, or would his experiments result in horror?

In the early 20th century, a race was under way to increase America’s flow of electricity.  To that end, Thomas Edison conducted a number of unorthodox studies to meet this growing demand. To his surprise and regret, however, these experiments would eventually lead to a dark creation that remains infamous today.

Radio Waves of Death, How to Make a Zombie, Jekyll vs. Hyde

Death by deadly ray sounds like a scene from a science fiction movie.  However, the legendary Nikola Tesla claims to have created one in the early 20th century.  Some say an 800-mile area in Siberia was devastated during his radio-wave experiments, leaving very few survivors.  Could this be true?

Scientist Wade Davis was obsessed with cracking the zombie secrets.  After tracking down a man with his own death certificate, he believed he had uncovered the science to zombie legend.