McDowells vs Royal Stag - Have they made it large or ludicrous?

Rival brands have once again blown their trumpets: The challenge is to find who blows it real hard! 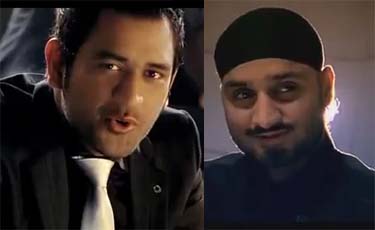 McDowells vs Royal Stag - Have they made it large or ludicrous?

Rival brands have once again blown their trumpets: The challenge is to find who blows it real hard!

Call it comparative, combative, attack, negative or parody advertising, the mud-slinging in the ad world among brands is once again out and open. And this time, the pot-shots are swanked between Mc Dowells and Royal stag alias Mahender Singh Dhoni and Harbhajan Singh. For the uninitiated, the issue turned into a fireball when a commercial of the Mc dowell’s soda featuring the Indian skipper a.k.a Dhoni went on-air last week. The ad was a spoof done on the rival brand- Pernod Ricard (that owns Royal stag) in return of the ball bearing factory episode released earlier by the popular whiskey brand. Whilst the original ad showcased Harbhajan struggling in his father’s industrial unit with a caption- ‘Have I made it large?’, the spoof of it tickled the funny bone, with Harbhajan’s look alike being slapped by his father for making large balls and Dhoni ending with a witty take stating that if you want to make big in life, then forget large and be different! (Click to see the commercials below!)

Evidently the commercial, is a dig on its rival brand and has taken a demeaning turn with all the buzz post its break-out. All of it includes a legal notice being sent to UB group Chairman, Vijay Mallya along with a public apology and a compensation seeking Rs 1,00,000 as the cost of the notice. And the ranting is that it not only presents the father-son relationship of Harbhajan Singh and his dad in a scornful way but also accuses the sentiments of Sikh community, often made stooges of mockery.

And the latest in this case as of now, is that after creating a lot of hullabaloo for over a week, with various twists and turns (including Mallya refusing to pull back the TVC), and its agency (Mudra) being tight-lipped about the whole fiasco, (as when we contacted Bobby Pawar, Chief creative officer, Mudra Group he declined to comment on the subject!), finally the matter seems to be at ease. As in a statement released on Friday, Mallya has given consent to withdraw the commercial in the name of cricket.

There have been similar cases in the past also wherein two arch rivals have indulged in the blood- bath launching spoof-rockets on each other’s land, hi-jacking paparazzi for a short time, settled scores and then finally resorted to amicable settlements.  (Follow the list below).

Short-lived as it is, these commercials are often scrutinised not just by the counter parties but also by the regulatory body. “One of the tenets in ASCI guidelines is ‘fairness’ in competition. And we have two aspects of it: - a) you cannot degenerate b) you cannot plagiarise,” explains Alan Colaco, secretary general, ASCI.

Colaco also elaborates further, that ASCI has not yet received any complaints regarding the tussle between the whiskey brands. Generally, whenever a complaint knocks at the door of ASCI, the minimum redressal time is around 15 days.

Interestingly, such kind of advertising is a strategic decision, made by the brand as well as the agency. And while advertisers may call it in different names, for the end consumers it’s a mere display of brawn and muscle power of two brands over each other.

But the rules of game aren’t too simple as it appears. As Moon Moon Dhar, Creative Director of Perfect 10 explains, “Firstly, the ad on which the take is should be on top of the minds of the consumers. Secondly it should be a good idea that is executed well and not one below- the- belt kinds of commercials.”

Even the brands have a perceptive to add to it. “Advertisers along with companies need to set their own guidelines. But one thing is sure that such advertising totally depends upon a brand’s philosophy. But whatever and whenever it is done, it should be done in the ambit of law,” opines Sunil Raina, Chief Marketing Officer, Lava International.

Call it a blasphemy or sheer marketing tactic, but it is said that all’s fair in love and war, and with brands prowling for every single consumer share in the market, this is something a damn serious stride, to be taken with a caution.

Here are some of the cases:-

It can be termed as the recent spat between Rin and Tide (a classic case of combative advertising, a step ahead then comparative advertising), wherein ‘Tide se kahin behatar safedi de Rin’ tagline left P&G bruised with in-your-face reply from HUL.  The ad was taken off-air after hogging much of a limelight.

The ‘No Samjhauta’ theme indicating the usage of cheap ingredients in Complan, posed a direct attack on the health drink’s posterity. Time and again, the two FMCG majors have abused each other either through print or TV ads, making the war even more hostile, to the extent of filing lawsuits against each other.

[youtube]http://www.youtube.com/watch?v=tK1297SKiGg[/youtube]
At times, the lethal weapon of parody advertising can backfire. For instance, Nestle’s Munch, answer to Cadbury’s ‘Pehli Tarikh’ campaign was not only disgusted by the ad frat but also failed to break the pretence set by Cadbury. As a result, the campaign went unnoticed.

Termed as the legendary example of parody advertising, this tussle between the cola brands is world known. To reiterate, Coca-Cola being the official sponsor of Wills Cricket World Cup 1996, Pepsi stole the thunder and how!  After roping in the whole pool of best players as brand ambassadors, it came out with a base line ‘Nothing Official About it’...And hence clearly, bowled out its rival out of the stadium, by gaining all the eyes soaring for it. Till date, advertisers and brand swear in its name.

It is all about survival of the fittest and this frugal attempt by the airline company’s made it loud and clear. A classic example of ambush marketing where Jet airways naively placed a billboard with an élan that they have changed, that resulted into a strategic play by Kingfisher by blatantly taking the credit of the former’s change. But this wasn’t enough. To further, hoarse the bare-knuckle fight, Go Air placed his plot on top confronting that they haven’t changed a bit and is the smartest of the lot. As brutal as it can get!

Countering the fearsome attitude of Mountain Dew, the third largest soft drink brand in US, Sprite came out a replacement of Dew’s popular tag line-‘ Cheeta Bhi peeta hai’. The Sprite version showed a man chasing a leaopard, evantually lifting him and running towards the end goal pointing- ‘sirf cheeta hi nhi peeta insaan bhi peeta hai’. Living to its image of ‘ No bakwas’ Sprite once again, hit the bull’s eye with this commercial.

The ad came out in 2008, as a retrospection of the popular Axe commercial featuring model Jeanene Fox, that showed the man spraying the deo brand all over his body, drooling thousands of women over him. The spoof made a humorous attempt with a bare-body skinny lad, manoeuvring two axes in his hands in order to lure the ladies. But he goes unnoticed over a killer dresser in black with the VO “Get Set Wet Zatak. Get Very, Very Sexy’. The commercial gained enough eyeballs to turn the brand’s head around.

Not bowled over by the dare-devil stunts of Akshay Kumar in Thums-Up commercials, the Pepsi guys thought of giving it back in a Youngistani way. Call it a cinematic copy or a spoof, the ad literally ripped off the macho-image of Akshay by referring him as ‘uncle’ in the film. The ad further intensified the cola wars..

Attack ads, are resorted often among the FMCG players, but when two Luxury car manufacturers, rant for their product, it’s definitely to vouch for. The print ad, in an admirable way, super eludes its competitors. Clearly, luxury grabbing at its best!

This commercial made the audience confused about the land...Whether it’s ‘Youngistan’ promoted by Pepsi or ‘Hindustan’ of Sprite, the consumer’s couldn’t have asked for more. Shahrukh khan, Deepika Padukone and Ranbir Kapoor all spoofed in one commercial, set the agenda right for Sprite- ‘Seedhi Baat, no bakwaas!’