Conceptualized by Triton Communications, the campaign consists a TVC; watch the TVC here. 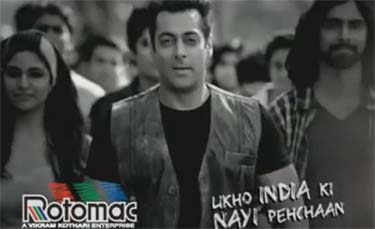 Conceptualized by Triton Communications, the campaign consists a TVC; watch the TVC here.

Rotomac Pens, part of the multi million Vikram Kothari Enterprise, manufactures over 1 million writing instruments a day, has pens ranging from Rs 5 – Rs 1 lac catering to every strata of the pen usage pyramid. Rotomac has always been associated with a celebrity since the very beginning. When the company was incorporated in the year 1992, they signed on Raveen Tandon for the campaign ‘Likhte likhte love ho jaye’ followed by one of the first to take the clear pen concept to the next level with ‘Glassee- Sab kuch dikhta hai and then with Javed Akhtar- Fighter Hamesha Jeettha hai.’

Rotomac has signed on Salman Khan for their latest campaign targeting youth of India aged between 16 to 35 years.

Pen & writing instrument communication is cluttered with feature driven advertising using celebrities. In order to create leadership imagery, Rotomac had to break away from the convention of the category and own a higher ground and powerful platform.

Renton D’Sousa, National Strategy & Creative Director, Triton Communications says, “There is a new wave… and it is here to stay. It is also bound to change the future of this country. Today’s youth are not ready to accept the system as it is…they are not ready to compromise. They demand an explanation. They believe that as responsible, concerned citizens they have a right to know what’s going on in the society that they live in. They are determined to write a new future of India.”

Right to Information Act 2005 mandates timely response to citizen requests for government information. It is a new weapon for the youth and people of the country to stop the wrong happening in society and bring the guilty to task by writing for a change.

Renton D’Sousa elaborates, ”The idea stemmed from here. This act has been a path breaking one in bringing some transparency to the system and changing lives. The whole concept of ‘WRITING for change’ (Right to Information) vis-a vis ‘fighting for change’ is about empowering people. This portrays a ‘pen’ as an important instrument of change and Rotomac as a harbinger of that social change.”

With this idea Rotomac stands for people power, empowerment and social change, besides… owning a much higher ground as compared to other players in the category. It also becomes much more relevant with the youth of the country. Hence the campaign thought ‘HAATH UTHAO… MAGAR LIKHNE KE LIYE…WRITE TO INFORMATION.’

“Salman Khan was the most obvious choice to personify this thought. He is a role model for today’s youth- a man who doesn’t hesitate to speak his mind, who believes in himself, who writes his own rules,” concludes Renton.

Speaking of the campaign, Rahul Kothari, President, Rotomac Global said, “I am very happy with how the campaign has unfolded. It pegs us at a different level. Rotomac shows that a pen is just not an instrument for writing, it’s an instrument for standing up for your rights which is captured in the new campaign very well.

He added, “Salman Khan appeals to every single pen user, from a college boy to a senior executive who use our pens and his presence take this campaign to another level.

Done through a series of 1 launch film and 4 short follow up films. The main plot shows the reality of how people resort to violence when demanding rights and how Salman Khan’s on screen image of a violent macho man has been cleverly used to encourage people to not ‘fight’  but ‘write’ and use the might of the ROTOMAC to bring about the change and reWRITE India’s identity.

The short films have Salman Khan urging the viewer to use the pen to stand up for the rights of the underprivileged and bring about a change in their lives and therefore, the country.