The whole country witnessed the proud moment to make it the most watched event ever on television. 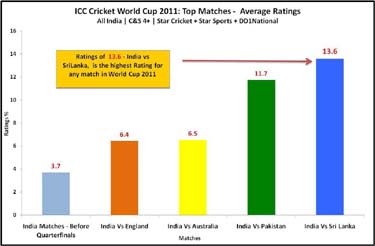 The whole country witnessed the proud moment to make it the most watched event ever on television.

It wasn’t only the nation and Indian Diaspora across the globe that went into unprecedented celebrations at 10:49 PM, when dhoni hit the last six to get us the world cup. The shot also made all the world cup advertisers to shake their both legs as the world cup final between India and Pakistan became the most watched event in India.

According to aMap, India vs Sri Lanka Final got ratings of 13.7, The highest by any event, and by far beyond Exceptional, while the winning Moment arrived, the Ratings Peaked to 21.44, well there is no event, no match, no show – which has attracted that kind of viewership.

The India-Srilanka final was rated more than any match ever, it even surpassed the India Pakistan match Ratings The semifinal between India and Pakistan got average rating of 11.7. Ten second ad spots for India-Srilanka world cup finals were sold for 25 lakh each. It is certain with such high viewership numbers, advertisers have achieved much more than their investment.

Explaining further on the findings, Jiniti Shah, Vice President, aMap said, “Yesterday's viewership broke all records. Every Indian was glued on to TV to see the big win! 64% of homes (C&S) were watching the game...The match was on for an average of 4 hours in every Household. Ratings peaked towards the end of the match when India held the World Cup...Advertisers can celebrate along with Team India!”

The match not only ended India’s long thirst for the world cup trophy but also became the Biggest Rated event in Television till date. With Ratings of 13.60 and Peak Ratings of 21.44 - it just shattered all previous record. The Average Time Spent/viewer of 187 Minutes shows the involvement of viewers in the match. This clearly shows they didn’t even change the channels during breaks and all eyes were glued to TV screens.