Wraps Delhi Metro for the first time with Pepsi branding and which ran from New Delhi to the Delhi airport, in style. 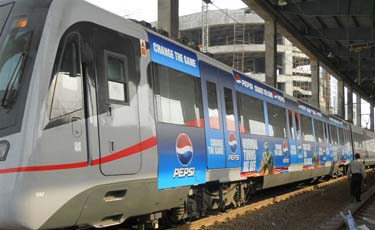 Wraps Delhi Metro for the first time with Pepsi branding and which ran from New Delhi to the Delhi airport, in style.

Mudra Max is all set to truly ‘Change The Game’ yet again for PepisCo, the cola brand from PepsiCo India stable. This time they unleashed one-of-its-kind branding initiative – a fully wrapped and branded train, not just any other train but the Delhi Metro! The Metro on the 28th of March, 2011 (Monday) was wrapped with Pepsi branding and ran from New Delhi to the Delhi airport, in style. This was the first time the Delhi Metro allowed itself to be wrapped by any advertiser, and what better way to do it!

The entire length of the train showcased Mahendra Singh Dhoni, Virender Sehwag, Harbhajan Singh, Suresh Raina and Virat Kohli staring at passers-by and spreading PepsiCo’s message to ‘Change The Game’. This innovation undoubtedly shocked the passengers and created a stir that will drive media benefits.

The innovation is conceptualized by Primesite, the OOH arm of Mudra Max, the agency that is known for its innovative outdoor solutions.

Talking about the campaign, Mandeep Malhotra, President, Mudra Max-OOH said, “This is the first time that a whole train wrap happened on the metro in Delhi that too on the most prestigious the Delhi Airport Metro express which links the Indira Gandhi International airport to central Delhi. This is a very High Impact medium and not only engaged the high profile airport commuter at the stations but also the commuters on roads when the metro travelled through the elevated corridor en route to the airport, The Pepsi campaign ‘Change the Game‘ created the exemplified impact on the game changer first time medium in Delhi. Mudra is proud to be associated with DAME and even happier that we could create desired impact for our client Pepsi.”

Commenting on the same, Sandeep Arora, EVP, Cola, PepsiCo said, “I’m thrilled to see the Delhi Metro with the Pepsi façade. Pepsi is amongst the first to explore new mediums and the Delhi Metro presents an exciting opportunity. Being the first to introduce the Delhi Metro with a new look and with Pepsi branding is a very proud moment for all of us as PepsiCo. I would like to thank the entire Mudra Max team for not only meeting our expectations but taking it to a completely different level.”