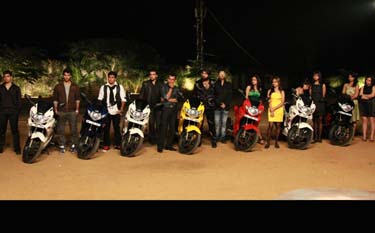 The search is over and the final 13 Roadies are ready to begin the most gripping journey on television. After a nationwide audition process, Raghu, Rannvijay and Rajiv have hunted down 12 strong contenders to battle it out on MTV Hero Honda Roadies 8: Shortcut to Hell! This year the game gets even more intense with Ceat MTV Hero Honda Roadies 8 Battleground3 winner is already waiting for them and with even more challenging tasks, tougher terrains and a brand new destination, the wondrous and very raw… Brazil! The final 13 Roadies set off on the journey to hell - Starting 5th March, Every Saturday @ 7pm only on MTV!

This year the dare devils who have earned themselves the most desirable title of becoming a Roadie are- Ceat MTV Hero Honda Roadies Battle ground 3 - The Highway to Hell winner - Vibhor Sharma and the others selected from the on-ground auditions are Anchal Khurana and Renee Dhyani from Delhi, Prachi Agarwal from Kolkata, Chandni Joshi from Ahmedabad, Suchit Singh from Haryana, Anamika Datta and Rahul Sheoran from Chandigarh, Mohit Saggar from Ludhiana, Avtar Nischal from Amritsar, Nagesh from Chinnadore, Devendra Singh from Jaipur & Pooja Bannerjee from Nagpur.

Aditya Swamy, Channel Head MTV India says, "The Roadies phenomenon just gets bigger every year. No.1 trending topic on Twitter, to 8,00,000 fans on Facebook and close to 2 million video views on mobile and the web, Roadies is raising HELL everywhere. And the interesting part is that journey is actually going to begin only this weekend. A truly edgy season is ready to break loose.”

In addition don’t miss the unadulterated action, as this season’s two most celebrated sports champions of India - Olympics bronze medalist Vijendra Singh and International shooting genius Lajja Goswami make an appearance on the epic journey to challenge the Roadies by doing what they do best. The Roadies team of 6 girls and 7 boys through their journey will test their endurance, competence and skills in the biggest adventure as the begin their journey from Bangalore; battling the rough terrains, the harsh conditions and unknown territories of India as they continue their journey all the way in the tropical country of Brazil!

Says, Raghu Ram, “MTV Hero Honda Roadies has always been a show about real youngsters, their spirit and sportsmanship. So we are very proud to associate with the real heroes of the country like Vijendra and Lajja. The contestants are really very smart, well grounded and very strong- mentally and physically. This season will be action packed and will stun the audience like never before. Needless to say, I am more than glad to be back on this crazy and thrilling journey.”

Watch the action as these 13 contestants battle it out to win the reality series, tune in for the drama, adventure, tasks and excitement to MTV Hero Honda Roadies 8- the Shortcut to Hell premiering this Saturday 5th March @ 7pm only on MTV. If that isn’t enough to quench your thirst, log on to mtvindia.com for behind the scenes information, gossip and exclusive updates on your favorite Roadies!

In addition a half hour episode titled “MTV HH Roadies- Graveyard” will air every Sunday 7 pm. The episode will feature the eliminated contestant of the week who will be interviewed by MTV VJs – Ayushman and Bani. This will be followed by Raghu’s take on the contestant’s performance, what he/she should have done, where they possibly went wrong, etc.