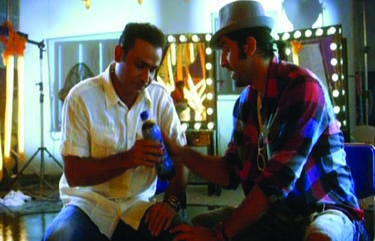 The campaign is conceptualized by Taproot India.

The irreverent and fun ad film shows not one but two game changers, Sehwag whose bat changes the game on field and Ranbir Kapoor who’s changing the game in Bollywood. In the ad that goes on-air on the opening day of the tournament, 19th February; Youngistaan’s heartthrob Ranbir will be seen teaching Sehwag how to play the Upar Cut through a Bollywood dance routine.

On Change The Game Ranbir Kapoor says, “Change the Game for me is everything that is unorthodox… it is about thinking out of the box; about being spontaneous, doing things smartly and from your heart… doing things that break the cliché.”

“Change The Game for me is the self belief and self confidence that pushes one beyond the limitations. To change the game, one has to think beyond the limitations and improvise. I have that confidence and the self belief that I can do whatever is needed to be done and change the game on the field, especially in the crunch situations,” adds Virender Sehwag.

Explaining his game changing move ‘The Upar Cut’, Sehwag said, “There are things that come naturally to you and the Upar Cut is one of them. I never practiced this shot in the nets and have always gone with natural instincts while hitting the ball. With the Upar Cut, I could easily hit third man six off a fast ball… that would surprise the bowlers. Since, it came to me naturally, that made it easier for me to perfect it. I always try to think beyond the limits and the Upar Cut, especially has been a true game changer for me.”

Remembering the moment, Sehwag says, “When I got dropped from the team in 2007, nobody expected the selectors to drop me but they did because of poor form. That’s when I changed my game both in terms of thinking and playing style. I started thinking on how to make my way back into the team. I got a chance and that’s when I proved myself again; I saved a test match for India when I scored 150 not out in Adelaide against Australia. I had just scored 20 runs in 2 hours… can you imagine Sehwag scoring 20 runs in two hours? That was not how I played, but I changed my game just to save the test match.”

“I remember once we were chasing around 387 runs against England and I scored a quick-fire 85 off just 50 odd balls. Those quick runs particularly changed the game in favour of our team. And eventually we had to chase less than 200 runs on the last day of the test match with 6-7 wickets still in hand,” added Sehwag.

In his message for Youngistaan, Ranbir said, “Change the Game in your life by doing something innovative, something unique and something that goes beyond the traditional. Do not let the ‘routine’ takeover… I try and change the game in what I do by experimenting with my roles and giving my best. I try to innovate and learn something new as I don’t want to get saturated and get bored of my work… bored of doing what I actually love. So what if it doesn’t work out at times at least I know I tried to change my game… So, love what you do, follow your heart, be fearless and change the game.”

Sehwag conveyed his message to Youngistaan by saying, “It’s important to change the game in life and think beyond your limitations and boundaries. Be innovative to raise the bar for yourself and your team in whichever field of life you play in… Change the Game!”