Kicked off on 8th January, Ticket 2 Ride is present on-air and online both. 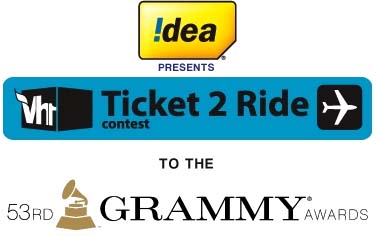 Kicked off on 8th January, Ticket 2 Ride is present on-air and online both.

Vh1 India and IDEA Cellular have joined hands to give music lovers a chance to be part of the most exclusive Music awards show of 2011 - the 53rd Annual GRAMMY® Awards! ‘IDEA presents Vh1 Ticket to Ride Contest’, will take 1 lucky winner and a friend, straight to the red carpet in Los Angeles, to attend the star-studded spectacle of the GRAMMY® Awards in February 2011!  Launched on Saturday, January 8th, the contest is available on-air as well as on the Vh1 Facebook page (www.facebook.com/vh1india), and claim your ‘Ticket to Ride’ to the GRAMMY®!

With securing an exclusive multi-year deal to telecast the GRAMMY® Awards, Vh1 India is taking ‘Ticket To Ride’ beyond all expectations as it lets its viewers witness the history of the music industry being re-written forever!

Says Ferzad Palia, Head - Vh1 India, “Watching the Grammy Awards LIVE in LA, breathing the same air as the biggest names in music is something we’ve all dreamt of! We’re delighted to be able to give 2 lucky fellow-Indians a money-cant-buy opportunity such as this. After all, it’s Music’s Biggest Night!”

Adds Anupama Ahluwalia, Senior Vice President – Marketing, Idea Cellular, “Music is at the core of Idea’s brand connect strategy. ‘IDEA presents Vh1 Ticket to Ride Contest’, will provide a new experience and platform to our over 81 million subscribers to get closer to the biggest icons of international Music, through this partnership with Vh1.”

In the past years, Vh1 Ticket to Ride has sent fans to watch legendary artists like U2, Coldplay, Eminem, Ricky Martin, Pearl Jam, Celine Dion, Bruce Springsteen, and Santana, Slash, John Mayer etc. This year, Vh1 has truly raised the bar as it takes you to the GRAMMY® Awards, undoubtedly the most-awaited event of music industry. With this fabulous feather in the cap for Vh1, it successfully maintains its position as the ultimate source for all the action in the international entertainment industry!