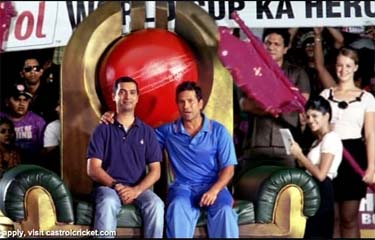 The TV commercial, conceptualized by Ogilvy and Mather will see Sachin playing himself and will introduce the Castrol ‘World Cup ka Hero’ contest in a unique way.

The ad starts with a wide shot of a cricket stadium in which the crowd is cheering and it is a crucial part of the match. Sachin Tendulkar gears up to face the bowler by taking his stance. The bowler starts his run up but the umpire stops him abruptly. Everyone on the ground including the bowler is wondering what is happening, even Sachin looks around the ground confused. The umpire turns around and looks at the Castrol ‘World Cup ka Hero’. The ‘Hero’ is shown peeping behind the leg umpire trying to look at Sachin.  The leg umpire had blocked Sachin’s view from the ‘Hero’s seat. The hero signals the leg umpire to move to a spot, so that he can get a clear view of Sachin. Next, Sachin is about to take the single to complete his 200, but suddenly hears a cell phone ringing. The big screen in the stadium shows the ‘Hero’ answering his phone. Once the hero is done, he signals the players to continue the game. Sachin crosses the crease and completes his 200. The hero cheers with the crowd and acknowledges Sachin as the true champion.

The next scene in the presentation ceremony where Sachin is declared as the man of the match.  Sachin walks towards the podium to receive the award and he looks towards the ‘Hero’s’ seat. Sachin sees the hero is not on his seat so he stops and looks around for him. Suddenly out of nowhere, the hero pops up behind Sachin. Sachin smiles and goes ahead to take the award. Sachin accepts the award and poses with the ‘Hero’. The Castrol ‘World Cup ka Hero’ is finally revealed! The ad ends with Sachin’s signature memorabilia shown on screen for lucky winners of the Castrol ‘World Cup ka Hero’ contest.

According to Giriraj Bagri, Vice President Marketing, Castrol India Limited, “We are really excited about joining forces with cricketing legend – Sachin Tendulkar, as our brand ambassador. We have a strategic marketing plan around our partnership with the ICC World Cup 2011 and this has been rolled out across India. The Castrol ‘World Cup ka Hero’ is an interesting concept which gives cricket fans an experiential platform for the world cup. Through this promotion, we endeavor to give the winners a lifetime experience that money can’t buy, of watching a World Cup match from a vantage position and being treated like a real ‘Hero’.”

To deliver on Castrol’s strategic messaging, which is all about performance and consistency, an integrated communication program has been rolled out. The 360 degree communication campaign involves a range of consumer engagement programs across various channels i.e. outdoor media, digital platforms and mass media advertising.

The campaign began with an outdoor teaser campaign on 27th December 2010 across 14 cities with Sachin Tendulkar waiting to fill a fancy empty seat next to him. The hoardings aptly mention, ‘Iss world cup, kis par hogi sabki nazar?’