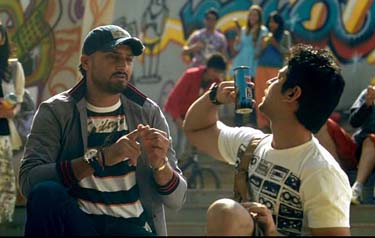 The campaign has been conceptualized by Taproot India.

Change the Game campaign salutes the new unorthodox yet immensely popular face of modern cricket. In the new TVC, Bhajji will be seen learning to bowl his famous Doosra from a college student. Here’s what Harbhajan Singh has to say about the thought behind Change the Game and his game changing bowling style, the Doosra:

Talking about his game changing move, Bhajji says, “When I was a kid and used to practice in Chandigarh, I used to see Saqlain Mustaq who bowled a lot of Doosras. I keenly observed him and came up with my own ideas and thoughts to perfect the ball. I practiced hard along with my colleague, Arun Verma, a wicketkeeper to apply my own technique and understanding to it. It took a lot of hard-work, dedication and time to develop this wicket taking ball. I mastered bowling the Doosra after over 2-years of practice and continue to do so.”

“I remember a lot of games where Doosra has changed the game for not just me but for India. I remember a game in Kolkata where we were playing against Australia and they were hammering all our bowlers. I suddenly bowled one Doosra to Ricky Ponting and got him LBW out. I went on to take my first hat trick for India in that match. That was surely a game changer at that particular time,” adds Harbhajan Singh.

On change in the game of cricket over the years and the game changers, Harbhajan says, “The game has changed dramatically over time. There are a lot of different and innovative shots played by the batsmen nowadays. It can be a nightmare for the bowlers as a batsman can hit the ball anywhere. There are a number of players in our team who have the ability to change the game. Virender Sehwag is one of them. Every time he is batting we know that he will dominate all the bowlers. He has changed the game for us during difficult situations. Another game changer for us is M S Dhoni who has got his own technique. He has a lot of power to hit the ball all around the field. These are the two guys who are the big game changers in our team.”