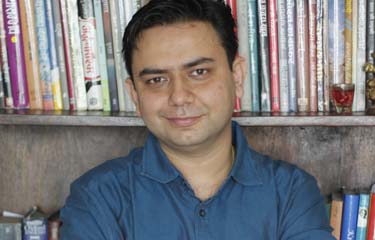 The ever changing fast paced Hindi GE industry is set to see major changes with noted Head Honchos quitting in the recent past. Saurabh Tewari, Head Of Programming – Fiction, put in his papers at Imagine TV as he gears up to venture into the business of Films & TV Production. Saurabh Tewari & Abhinav Shukla have come together to launch Film & TV Production company ‘Nautanki Films Pvt. Ltd’, is backed by Media House, B.A.G Films & Media Limited, and believed to have picked a significant stake in this new venture for an undisclosed amount

Saurabh Tewari had joined Imagine TV, the flagship Hindi GE Channel of Turner General Entertainment Networks India Pvt. Ltd as Head of Programming – Fiction, a year ago. A noted name to reckon with, Saurabh Tewari has over a decade of experience in the media and entertainment industry. Breaking away from the clutter of Saas-Bahu sagas, he was the brain behind unconventional shows like Gunahon Ka Devta, Chandragupt Maurya, Baba Aiso Varr Dhoondo, Preeto, Dwarkadheesh, Uttaran, Balika Vadhu, Laagi Tujhse Lagan, Bhagyavidhata that got rave reviews from viewers across the length and breadth of the country.  Prior to his move to Imagine TV, he was Associate Vice President and Creative Director at Colors and played a pivotal role in the launch and subsequent success of the channel. Confirming on his new venture Saurabh Tewari said, "Nautanki Films Pvt. Ltd is a long awaited & great opportunity and the company has serious plans to create innovative yet massy content.  Being a story teller, I have always thought of venturing into something where my expertise can come in handy and with the new company in place, Abhinav and I would put forward our best effort to live up-to the expectation.”  A Bachelor of Arts from Lucknow University, Saurabh began his career directing ad films.  Since then he has worked with a variety of television production houses primarily as a writer which have given him a completing understanding of the creative & production business. In 2006, he moved to Zee Telefilms as Assistant Vice-President of Programming for ZEE TV where he was instrumental in growing the market share of the channel. In late 2007, he moved to Viacom 18 as a part of the start-up team for the launch of Colors. In his role as Associate Vice President and Creative Director, Saurabh played a key role in the launch of the channel and was involved in creating and designing the entire line up of fiction shows for the channel.

Adds Abhinav Shukla, "Nautanki Films Pvt. Ltd would be another effort to establish a strong contender in the market, which would deliver interesting content in TV and Films both. In last few years, TV & Film viewership has changed and audience have accepted new approach of programming. And, we hope that with new initiative we can also bring a difference and make a mark in the Industry. Partnering with Saurabh is the strategic move as he knows the pulse of the Indian audience. Saurabh and I would like to thank Anuradha ji to have extended her support in this endeavour.”

Anuradha Prasad, M.D, B.A.G films Pvt. Ltd said, BAG Films have always thrived to create quality content and this is our another step towards it. "I congratulate Saurabh and Abhinav on this new venture. Saurabh's creative talent, coupled with Abhinav's strategy planning will surely take Nautanki Films Pvt. Ltd. to greater heights. My best wishes are with them in their endeavour.”

The Company ‘Nautanki Films Pvt. Ltd’ will be focusing primarily on developing its business in Film and Television production in the dynamic & fast growing market like India, with two film projects all set to go on floors early next year. With B.A.G Films acquiring substantial stake in the company, their strategy is to create and deliver popular, high-quality programming to consumers globally.