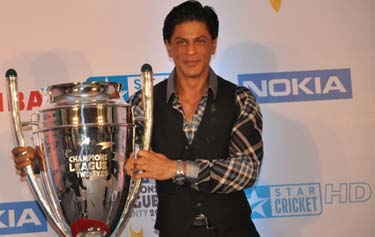 ESPN STAR Sports (ESS), the official broadcaster and commercial partner of Nokia Champions League Twenty20 (NCL T20) starting September 19, 2011, has formally unveiled superstar Shahrukh Khan as the face of the tournament. Nokia, the title sponsor of the mega cricket event, also announced the ‘Nokia Ke Asli Champions’ campaign. Winners will get an opportunity to be part of actor Priyanka Chopra’s ‘Champion team’ and watch the finals live with her.

ESS further announced that it will air the tournament in more than 174 territories worldwide. NCL T20 will also be telecast in a record 18 different international languages across the world, making it one of the few cricket properties presented in such a customised manner.

In India, all the 29 matches would be broadcast live on STAR Cricket and STAR Cricket HD. ESPN will carry all 23 matches of the main tournament with Hindi commentary.

Nokia’s consumer initiative, ‘Nokia Ke Asli Champions’, has been innovatively designed to connect people to their passion for cricket. To be a part of the campaign, Nokia is running a series of competitions to identify ‘Asli champions’ across various categories such as the Air Cricket Champions, Commentary Champions and Cheer Champions across select cities in India. The contest will run in Delhi, Mumbai, Chandigarh, Pune, Bangalore, Chennai, Hyderabad and Kolkata from September 15 to October 5, 2011.

Aloke Malik, Managing Director, ESPN Software India, said, “Shahrukh Khan is a great fit as the face of Nokia Champions League Twenty20 and we are delighted to have him with us on this fascinating journey. The promo which features Shahrukh is already on-air and has received rave reviews. His participation is however not limited to being the public face of NCL T20. As a team owner, I am sure he will be looking forward to Kolkata Knight Riders qualifying for the main edition of the tournament.”

Malik added, “It is a matter of great pride that Nokia India has come on board as the title sponsor. Overall, we are delighted with the advertiser response to the Nokia Champions League Twenty20 till date. Nokia, Toshiba, Coca-Cola, Ambuja Cements, Next Retail and Digiworld have already joined us as on-air sponsors, while Nokia, Toshiba and Coca-Cola have signed up as on-ground sponsors. Over the next few days we will announce further names as we get them on board.”

Sundar Raman, CEO, Nokia Champions League Twenty20, said, “The 2011 edition of the Nokia Champions League Twenty20 is set to be the tournament’s biggest and most successful yet. The addition of a six-team qualifier for the first time adds another dimension to the tournament. It also provides a record number of teams with a chance to win club cricket’s most prestigious prize.”

D Shivakumar, Managing Director, Nokia India, said, “Cricket holds a special place in the hearts of Indians and we have been associated with it over the years through our association with the T20 World Cup, Kolkata Knight Riders and IPL. We are excited to be the title sponsors for Champions League T20 as it reinforces our commitment to the youth by connecting them to their passion.”

Commenting on his association, Shahrukh Khan, added, “I am extremely proud to be associated with Nokia Champions League Twenty20. I am doubly happy as my team Kolkata Knight Riders is also in with a chance of qualifying for this prestigious event.”

Tengguo Wu, Director – Digital Products, Home Appliances & Services Division, Toshiba India said, “We at Toshiba India are very excited to be associated with the Champion’s League T20 tournament. We feel it’s the right time for Toshiba to enter the big league and showcase our technology and marketing strength in India. We are all set to take the market by storm, our association with Sachin Tendulkar and this tournament is part of our overarching strategy of reaching out to Indian consumers in an impactful way and being among the top brands in the Indian durables and PC market. This is just the beginning for us at Toshiba.”