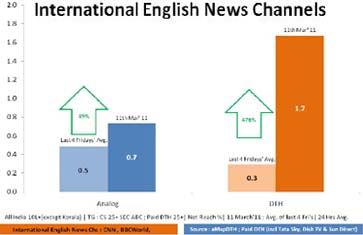 Japan’s double tragedy of the 8.8 magnitude earthquake and tsunami attracted high viewership in India on both Hindi and English news channels. The study says that while the shares of Hindi News channels increased, it is the English News Channels that saw more viewers’ coming- particularly the international English news channels.

The reach of international news channels on 11th March, the day when tsunami and earthquake hit Japan, was .7 on analog and 1.7 on DTH. See the chart below:

The Indian English news channels had reach of 15.7% on analog and 4.2% on DTH platform. See the chart below:

Briefing BestMediaInfo.com on this study, Jiniti Shah, Vice-President, aMap, said, "While there was increased viewership during the Japan tragedy on all news channels, International News Channels (English) increased in viewership by nearly 6 times on the DTH platform over the average – Global news of this sort is preferred to be watched on international news channels(English). Accessibility induces tune ins on the DTH platform"