Star Plus Brings Another International Format MasterChef To India

Can the success of Kaun Banega Crorepati, based upon UK’s ‘Who wants to be a millionaire’, be repeated? 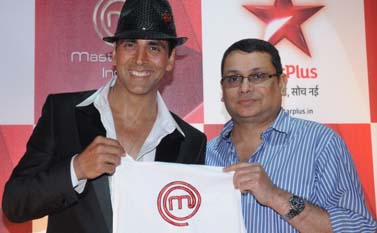 Star Plus Brings Another International Format MasterChef To India

Can the success of Kaun Banega Crorepati, based upon UK’s ‘Who wants to be a millionaire’, be repeated?

After Kaun Banega Crorepati, Star Plus has brought another popular international format MasterChef to India. The channel first brought UK’s gameshow ‘Who Wants to Be a Millionaire?’ in India as Kaun Banega Crorepati in 2000. With Amitabh Bachchan as show host, KBC broke all the records on television. Now it is to be seen whether MasterChef India repeats the same success story after 10 years!

Star Plus has found Amul as the title sponsor of the new show MasterChef India with Akshay Kumar as a Judge of the show. With MasterChef India! STAR Plus will take cooking beyond the four walls of the kitchen to acknowledge and encourage the culinary skills of passionate cooks and groom them to become the ultimate professionals of the art.

Starting October 16th, ‘MasterChef India’ will identify 12 contestants who will compete with each other, while Chefs Kunal Kapoor and Ajay Chopra will judge the show along with Akshay. The show promises to offer a high voltage drama, nail-biting tension and fun filled culinary tour. The contender who will able to stand strong with his / her will & talent, through the mounting pressure each week, will be adjudged as India’s first ever - ‘MasterChef’.

After breaking ratings’ records in UK and Australia, MasterChef is coming to Indian television for the first time. Anupam Vasudev, Executive Vice President, Marketing and Communications, Star India, says, “After pioneering successful concepts in reality shows like Aap Ki Kachehri and Sach Ka Saamna, STAR Plus is now ready to present ‘MasterChef India’. With this show, we once again bring a completely new dimension to this genre on Indian television. International versions of MasterChef have gained a huge fan following in two of the world's biggest markets – UK & Australia. Hence bringing the format to a country like India, where diverse cuisines exist, was only a natural choice. With Superstar Akshay Kumar at the fore and larger-than-life cooking challenges we hope to unearth the best talent in the country with this show.”

A chef by heart and an actor by profession, Akshay Kumar said, “I am very happy to be returning to my roots after so many years. My two favorites – ‘Cooking and Camera/Entertainment’ are coming together and I am excited to be a part of it. I have been following the international version of MasterChef regularly and I am glad that Star Plus is bringing this great and interesting challenge to the Indian audience.”

Celebrity, reality, action, drama, pressure, the show has everything required for full entertainment of the audience. Still, it would be great to see if an internationally hit format can repeat the same success in India even after a gap of 10 years!