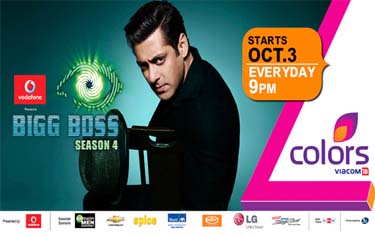 COLORS is all set to launch the fourth season of BIGG BOSS on this Sunday, October 3, 2010 at 9 pm with aggressive marketing plans which has been designed to create high impact and scale across major media platform. The channel is following a 360-degree marketing approach to promote the show, across television, print, radio and outdoor to create and sustain the buzz this season.

COLORS kick-started its on-air initiative with a series of innovative and eye catching promos and also released a special music video with Salman Khan for to create hype and excitement around the show. The music video is being played across various platforms. The channel also plans to run the promotional music video during the screening of Priyanka Chopra- Ranbir Kapoor starrer Anjaana-Anjaani across cinema halls in India.

To create high impact on radio, COLORS has tied –up with Big FM and other key FM stations. Apart from buying ad spots the channel will also run a contest, thereby involving the consumer directly with the show.

The outdoor campaign includes two-week activity to cover over 40 cities across India. As part of the print initiative, it has bought advertising space in almost all the leading publications across India to reach 100+ cities in key TAM markets on the launch day. On the BTL initiatives in Mumbai they have tied with BEST buses and mall activation in all Big Bazaar outlets.

Speaking on the innovative marketing initiatives, Rajesh Iyer, Director- Marketing, COLORS said, “Bigg Boss is amongst the biggest and the most exciting shows on Indian television today; and with Salman Khan as the host, the 360-degree marketing initiatives are also developed to create high impact. The communication strategy is designed to fuel the curiosity and create buzz till the show goes on air and also sustain post launch interest.”