Former Indian Cricket Captains honour presented the trophies to the biggest sporting greats of the past decades in a glittering ceremony. 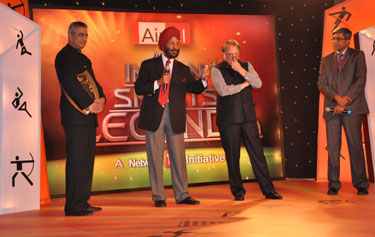 Former Indian Cricket Captains honour presented the trophies to the biggest sporting greats of the past decades in a glittering ceremony.

Celebrating the pride moments of Indian sports history in a true sporting spirit, the Network18 Group channels CNN-IBN, IBN7 & IBN-Lokmat organised one of the most emotional events Indian Sports Legends Awards on 25th September, 2010 at The Taj Palace in New Delhi.

‘Indian Sports Legends – A Network18 Initiative’ is an initiative aimed at felicitating the achievements of India’s biggest sporting greats of the past decades. These greats are now an inspiration for the new generation of champions, expected to bring glory to India in the Commonwealth Games. The award recognises the selfless contribution of these legends who have remained India’s sporting icons for generations. All-time greats of Indian cricket like former captains, M.A.K Pataudi and Kapil Dev honoured these sporting icons.

The sporting legends felicitated at the ceremony are:

The awards are presented in partnership with Airtel. ‘Indian Sports Legends – A Network18 Initiative’ adheres to a process of selection which has The Network18 Editorial Board at its core. The Network18 Editorial Board drawn from the editorial masterminds of CNN-IBN, IBN7, IBN-Lokmat, CNBC-TV18 & CNBC-Awaaz draws the list of nominees and then deliberate to finalise the names keeping in mind their contribution to Indian sports as well as the society at large.

Meet the Legends in their inspiring stories that will be showcased daily, between September 27 and October 1, 2010 on CNN-IBN at 08:30 PM, on IBN7 and IBN-Lokmat at 7:30 PM respectively. These special episodes are to serve as a precursor to the telecast of the Grand Finale of the “Indian Sports Legends-A Network18 Initiative” that will be telecast on October 2 on CNN-IBN at 12 Noon, on IBN7 at 8:00 PM and on IBN-Lokmat at 7:00PM.

Speaking on the occasion, Rajdeep Sardesai, Editor-in-Chief, CNN-IBN, IBN7 & IBN-Lokmat, said, “It gives me great pride and pleasure to share the stage with these legends. It’s really an honour to present such a unique initiative, the Indian Sports Legends, to honour the greatest sporting legends for their timeless contribution in bringing unparallel glory to India. I hope this initiative encourages the youth of our country to pursue their passion for sports and in the process bring glory to the country. I would like to thank all our distinguished guests for their presence here in support of these sporting legends.”

Speaking about the awards, Ashutosh, Managing Editor, IBN7, said, “I would like to extend my heartiest congratulations to these sporting legends that have done exemplary work in bringing India on the world map of sports. It gives us great pride to honour the pioneers of Indian sports.”

Nikhil Wagle, Editor, IBN-Lokmat added, “This initiative truly marks the celebration of the spirit of sport. With this we also hope to encourage the youth of our country to pursue their passion for sports and in the process bring glory to the country.”