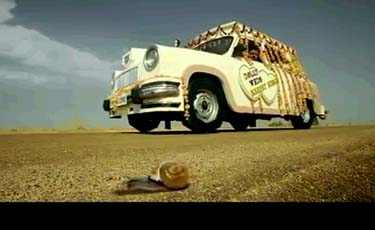 Bigger is better – this is the message that one of the largest broking houses in the country - Religare Broking wants to convey across all the class and category of people through its first mega campaign launching today.  The campaign is conceptualized by Scarecrow Communications which has created two path-braking TVCs and 9 print advertisements in its category.

The two TVCs titled Archery Contest and Indian Wedding Car have been developed to convey the message “Size is important” and “Choose the right vehicle” while keeping the campaign idea very simple yet simplistic.

The Tribal Archery ad is about an archery contest held near Jaisalmer. The film shows an old aged tribal person with weak eyesight targeting a small fruit kept on someone’s head. Suddenly there comes twist in the story when the viewing glass of the person holding the arch breaks. The small sized fruit gets replaced by a big pumpkin proving that bigger in size has lesser risks. The TVC ends with the clear message that Size is important especially when it comes to broking.

The Indian Wedding Car TVC has a different story to tell. It opens up showing journey (bumpy ride) of an Indian wedding car carrying the groom which is running late to reach the wedding venue. That car is not simply running slow but it is walking even behind snail, not even a tortoise. The music track created for the film is sung by Mamta Sharma - the singer of popular Bollywood song "Munni Badnam" of movie "Dabangg". This TVC conveys to choose the right vehicle carefully.

Speaking with BestMediaInfo.com, Subhrangshu Neogi, Director, Brand and Corporate Communications, Religare Enterprises, said, “The ad films will be seen across all the top national and regional television channels and theaters while the print ad can be seen in select business newspapers and magazines. The online campaign will follow after sometime.”

“We wanted to create an effective campaign to reach the masses as the security business is warming up. This campaign is sure to open up the cluttered market with so many small players. Religare Broking is the largest in its category which people can trust as the right vehicle and this is what we want to convey and educate the common man. We advise people where to put money so we know where to put our money to create the effective awareness campaign with a strong brand recall,” Neogi adds.

Neogi goes by saying, “Manish Bhat, Raghu Bhat and the entire Scarecrow team has finally come up with the superb idea which is never seen in finance and broking category so far. We are glad to partner them.”

Talking about the idea, Manish Bhat, Founder Director, Scarecrow said, “We had the challenge to create a communication for the largest broking product while maintaining its dignity. The idea is to communicate and educate people about the risk factors involved when they get into trap by smaller players present in the every corner. We had to create such communication that reaches common man with simple message of trust.”

Raghu Bhat, Founder Director, Scarecrow said, “People interested in stock market are highly ambitious and hence our aim is to educate them to trust on the largest broking house of the country to keep their hard earned money in safe hands. We have the objective to reach and tell the common man to choose the right vehicle and hope this campaign will convey its message effectively.”