The Diwali special episodes will be aired from Nov 1st to 4th November at 9:00pm. 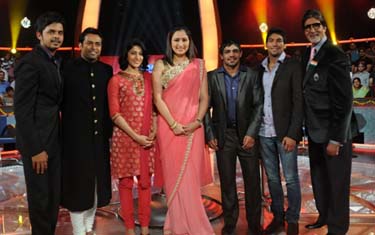 The Diwali special episodes will be aired from Nov 1st to 4th November at 9:00pm.

After a stupendous start, which broke all the recent TRP records of all the television shows Kaun Banega Crorepati is bringing special Diwali episodes starting from Monday, 1st November onwards. A brand new set, a special format, new hot seat and who’s who of Bollywood and Television, add to that the sportspersons who made India proud in the recent Commonwealth games and television does not get bigger than this.

The Diwali episodes will showcase some of the hottest celebrities like Superstar Akhsay Kumar who along with his Action replay actors, Neha Dhupia, Shreyas Talpade and Rannvijay among the others played KBC with their team members. Also  to ensure Fun never stops for the KBC viewer , super funny cast of Golmaal Returns including Ajay Devgan, Arshad Warsi, Tushar Kapoor, Kunal Khemu, Rohit Shetty, Shreyas Talpade also makes an appearance on KBC and play the game while  bringing  the whole set down with their funny antics.

The Diwali special episodes will be aired from Nov 1st to 4th November at 9:00pm on Sony Entertainment Television.